In any case in which it is ultimately found that a lawyer has violated the Rules of Professional Conduct, the Professional Conduct Committee imposes or recommends an appropriate sanction. Possible sanctions are reprimand, public censure, suspension or disbarment. The Attorney Discipline System does not have authority to award money, resolve fee disputes, or affect the underlying case.

The flowchart below outlines the processing of a grievance as it moves through the Attorney Discipline System. Click the links to the right to learn more about the different groups and committees that are part of the grievance process. 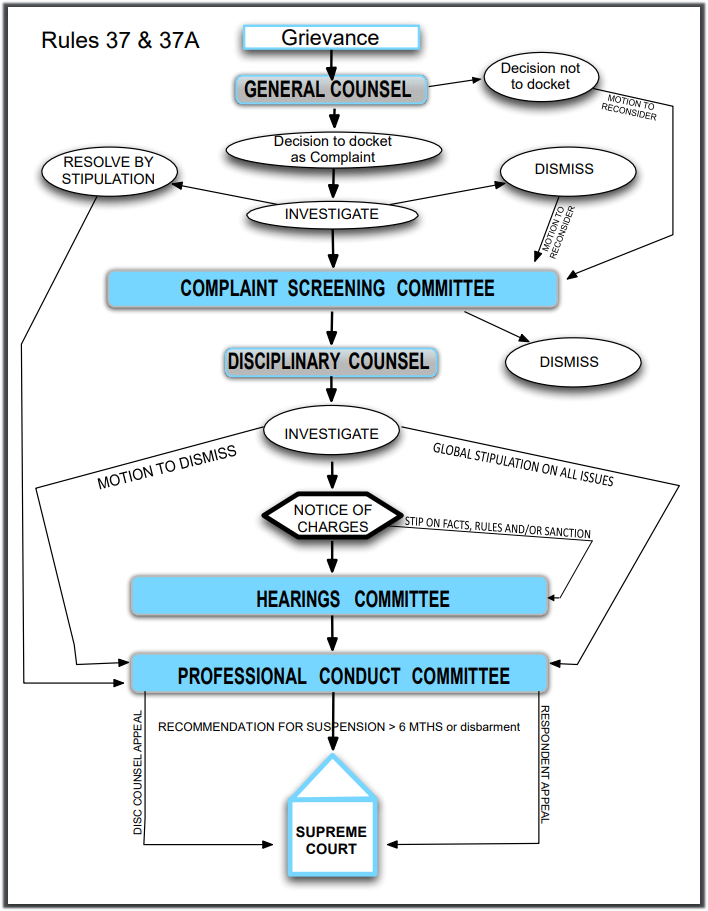 General Counsel receives and evaluates written grievances against attorneys. The grievant may be asked for additional information or copies of documents.

In most cases, the respondent attorney will be given an opportunity to voluntarily respond to the grievance at this early stage.

Once all the material has been reviewed, General Counsel will evaluate the matter and determine whether it should be docketed and processed further.

Matters that are not docketed are kept for two years from the date of initial receipt and then destroyed, as required by a New Hampshire Supreme Court Rule.

Docketed cases are investigated further. Thereafter, General Counsel may either dismiss the matter or bring it before the Complaint Screening Committee.

The nine-member Complaint Screening Committee consists of five lawyers and four non-lawyers. The Committee meets once a month in Concord.

The Committee will consider whether there is sufficient evidence of a violation of the Rules warranting further processing of the matter, and may take one of the following actions:

The case will be scheduled for trial before a hearing panel on all contested issues. Complainants may be asked to appear and testify under oath in this proceeding.

After the hearing panel issues its findings and recommendations, the case will then be reviewed and decided by the Professional Conduct Committee. In cases where the Committee recommends a sanction of suspension greater than six months, the matter will be referred to the New Hampshire Supreme Court.

The Hearings Committee consists of members who are both lawyers and members of the public, who are appointed to hearing panels to consider individual cases. The number of times that members are asked to serve on a hearing panel in any given calendar year depends on the number of cases in which hearings are required.

When Disciplinary Counsel, acting on a referral from the Complaint Screening Committee, makes a request for a hearing, the Hearings Committee Chair appoints a hearing panel from the Committee's members.

Each hearing panel consists of three to five members, with at least one non-lawyer member on each panel. The Hearings Committee Chair designates a hearing panel chair as well as a reporter who is responsible for writing the panel report.

The hearing panel, after hearing the evidence, makes findings of fact and conclusions of law in a written report and recommends that the Professional Conduct Committee either:

The 12-member Professional Conduct Committee consists of eight lawyers and four non-lawyers. The Committee meets in Concord once a month.

The Committee considers the entire record and takes certain actions including the following: